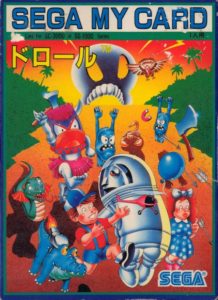 Drol, not droll. I know what the latter means – “curious or unusual in a way that provokes dry amusement.” Not sure about the former. You’re a robot and you rescue… sad girls with balloons? And rocket-powered lizards? Sounds like an indie film, sans the whimsy and “do you feel” soundtrack. But Drol is no film. Drol is a game and it does exist. Beyond that fact lies nothing.

Everything is as it should be, I guess.

But perhaps I’m looking less for Drol‘s meaning, than its purpose, its reason for being. In Drol, you control a generic-looking robot across a four story map layout. Each story is barren, save for the occasional Roman-Greco pillar and random enemies. The enemy design ranges from scorpions and goblins to flying swords and axes hurled from unseen hands. The robot levitates and is able to shoot multi-colored balls out of his chest to combat any threats. After you’ve littered the map with goblin corpses, a crying girl with a balloon will emerge from nowhere. You collect her. The level continues, more death, more mindless wandering, then a rocket-powered lizard appears. Collect it, and a curtain falls across the screen. You’ve just bore witness to an off-Broadway play in some drunken back alley.

Oh, but then the curtain rises, and it’s another level, this time with more threats, similar outcomes. There are only three distinct levels, each with slight variables. All of them require the collecting of a small balloon-holding girl and a rocket-powered iguana to progress to the next stage. After these three levels have been completed, the game repeats and it’s more of the same. Not at all droll, but perhaps very Drol.

I fail to see why Drol exists. Is the fun derived from shooting enemies for copious amounts of points? Points are achieved easily enough by standing in the middle of any of the four stories and shooting back and forth. Enemies regenerate forever and there is no time limit. Have at it. Destroy! Consume! Drol!

And why are you a robot? Beyond levitation, you don’t do any inherently robot-y “things”; I’m not sure I would equate levitation with robots, anyway. The balloon girl and the lizard are neat designs, but they’re just as random as the goblin gargoyles and scorpions that chase you around. You collect the girl and the lizard because the game tells you to, not for any particular reason.

Nothing in Drol makes sense. Nothing made me care about what was happening at any given time, nor did I ever feel a desire to push forward. I could if I wanted to, I suppose: the game only starts to get hard after you’ve gone through the three levels a couple times. But why bother? Why, Drol? Why Drol, indeed.

Drol is Dutch for turd, so the game was probably destined for suck. At least the last few games were pretty good.

What the? Man, I was looking forward to this one as it was probably my favorite game for the Apple II when I was 6. It sounds like this was totally gimped in the conversion, though. If I’m reading your review right, you rescue the girl and her alligator in each of the three levels? Ugh.

In the original, you’re reuniting a family. The first level is enemy scorpions + a bird on the top level (was it in this one?) + the little girl and her lizard. The second level is enemy monsters + shot-blocking magnets + the witch doctor (was there one in this?) + a little boy and his alligator. The third level is enemy serpents + weapons + venus flytraps (were there any?) + the mom, bound and gagged at the lower right of the level. After that, you’d get a heartwarming scene in which the family is reunited, before the witch doctor recaptures them.

Each loop would get more difficult: enemies would start firing projectiles, the boy & girl would move faster, the number of witch doctors would increase, missiles would pop up if you were flying for too long. It had a really satisfying difficulty curve that kept you coming back for more. At the height of our prowess, my brother and I could get to the 6th or 7th loop.

If you’re interested in what SG-1000 users missed out on, here’s a good video: https://www.youtube.com/watch?v=ThmJb8tALe8

Some of the enemies are similar, but it’s the girl and the lizard in all three of the levels.

Thanks for posting a link to the video too. It’s a shame Drol didn’t get the respect it deserved.

Nah, man, the SG-1000 *was* like that. Exactly like that. I played this game as a child. In the first level, you have to rescue the girl, then the second level, the girl AND a boy chasing a helipcopter, then in the third level, both of them, and the mother in the bottom right.

and the magnets. And the witch doctor scene. It’s all there…

…and if you shoot the bird, it turned into a roast bird. Delicious.