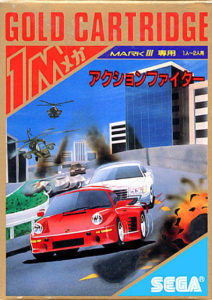 Tailgaters are just the worst.

Not pictured: any action or fighting.

The overhead vehicular combat sub-genre didn’t see many games: Spy Hunter for Arcade/NES, Super Spy Hunter for NES, Action Fighter for Arcade/Master System, and, uh, that’s about it? I know there were more, but these are the ones people remember, the ones that made an impact, however slight. The lack of games is understandable, given the limited nature of the genre. Driving and shooting certainly doesn’t lend itself to wild interpretation, which explains why Action Fighter isn’t much more than an alternate take on Spy Hunter. Not a bad thing, certainly, and Sega does mix it up with the ability to transform your vehicle throughout the game. Indeed, the transforming vehicles give Action Fighter the little personality that it has, but the insane difficulty and lack of varied level design hamper the overall fighting of action.

You begin proceedings in Anycity U.S.A. on a motorbike. The traffic around you is lunchtime heavy – not constricting enough that you can’t get around other drivers, but clustered to the point where you’ll eventually have to do some evasive maneuvering. Luckily, you have your trusty motorbike machine-gun mount to take out any unnecessarily slow or obnoxious drivers. You can control how fast you go with the D-pad, a la Spy Hunter, but remember, you’re on a motorbike. One tiny hit from another motorbike or a car and you’re pavement meat.

The upside of being pavement meat is that, as long as the timer’s running, you can die as often as you want. The timer counts down from 1,000 seconds, you’re not penalized time when you die, and you begin fairly close to where you crashed. Sounds unreasonably fair, doesn’t it? That’s because Action Fighter is balls-to-the-wall difficult, particularly in the air (I’ll touch on the flight portions later). Even with the ability to die as much as you want within the time limit, you’ll be hard-pressed to get past the first or second level without cheats. Sega wanted players to be serious about fighting action.

In the future, we’ll live in perfect blue buildings.

Motorbikes are flimsy and crash easily, which is why you should transform into a car as quickly as possible. Transforming is as easy as collecting the letters A, B, C, and D, which are scattered along the road as you drive. Collect all the letters, your bike will become a snazzy sports car, and you’ll have double the fire-power. Those ambulances in your way won’t know what hit ’em! Once you collect additional letters E and F, your car will turn into a jet, and Action Fighter will morph from overhead vehicular combat to mediocre shoot-em-up.

At first, I was in awe of Action Fighter‘s shoot-em-up portions. I love the rush after your car transforms into a jet, of leaving the shackles of the ground for the freedom of the sky. I loved how the clouds have layers, so that when you fly into them, a piece of the cloud covers up portions of your jet. I love how you catch glimpses of the city roads where you were just driving. But the actual shooting portions? Ugh. Ugh on a stick, with ugh juices dripping onto your hand.

At first, these sections seem to hail from your standard mid-80s shmup. Enemies rush at you, drop some projectiles off in your face, you shoot them or they fly away. Then you fight helicopters, planes, missiles, all of which take at least three hits with your standard weapon, the weapon you leave the ground with. This is annoying, not because challenge is bad, but because there’s so many waves of enemies rushing at you, one after the other. You’ll be lucky to destroy one plane in a group of five because of how beefy the planes are against your weapon. And after those five planes have left, five more take their place. Only when you get the P power-up does your weapon upgrade and all of the aforementioned airborne foes go down with one hit.

Just stay over on your end of the screen, Mr. Missile, and we’ll get along great.

Collecting the power-up is the way to go, but you still have to avoid all the projectiles and the enemies themselves. The bullets are white, which doesn’t do you any favors when you’re soaring through white clouds. And not only do the enemy copters and planes have rapid movement, but ground bases a la Xevious spew projectile pellets at you too. And the worst part? The levels just keep going. You’ll fight the same swarms of enemies time and time again with little change. When you finally reach the boss, you won’t care about playing anymore, but you’ll fight it anyway ’cause it took for-freaking-ever to reach them.

The aforementioned boss that I totally beat out of spite.

There are five levels total, which sounds like a small amount. Trust me when I say five levels is more than generous: each of them are long enough and difficult enough to ensure you’ll be fighting action for quite some time. The levels themselves are broken up into land/air portions. Level 1, for example, begins in the city, but ends in the air, while Level 2 begins in the air and ends in the city. The scenery switcheroo is nice, but somewhat perfunctory, given that the level layouts and designs barely change. If you’ve played the air portion in Level 1, you’ll know what the air portion in level 4 looks like.

Flying over cities is always a nice change of pace.

Action Fighter didn’t start off so monotonous, though. The original arcade version gave the players the option to play with five vehicles – car, helicopter, motorbike, dirt buggy and jet ski – through the course of the game. Instead of separate levels, you’re on one huge map that gets uncovered with the more map pieces you find. While enemies are constantly barraging you, there are no bosses until the end of the game. Instead of a time limit, you have a fuel gauge which has to be monitored constantly. Run out of fuel and it’s game over. Quite a different title, all told, but both versions share an unwavering brutality that would offend all but the most steadfast of gamers.

Tanks in a city? That would never happen.

Take away the monotony and devious difficulty, and there’s a shell of a decent game in Action Fighter. But seriously, friends, Action Fighter is really hard. Given the amount of action the game levies at you, you’re in a constant state of anxiety and readiness. It’s good to be somewhat tense while playing a shmup, but the ridiculously long levels leave you feeling exhausted by the end. My recommendation: play with one of these codes, beat the game, then if you still have more fight left in ya, come back and try the game without a code. You’ll see whether or not that hair on your chest is legit.

I wonder if Sega heard the “You can fly a plane in Spy Hunter” rumors and decided to build a game around it?

Why waste development time by trying to balance out the gameplay and difficulty when you can just include cheat codes !
It’s the first I’ve heard of game shipping with cheat cards it’s almost an apology from Sega about the difficulty.

See my post below. I’m pretty sure it didn’t ship with these codes.

Ok so I looked at those cheats. Those were definitely not included in the instruction manual. That scan looks like a Sega of America hint page. I think you could mail order them. That definetly was not in the manual or I would have used the shit out those codes.

Here us the full scan that is obviously from a guide for SMS games
http://segaretro.org/images/d/d7/ActionFighter%26MyHero%26WonderBoySMSUSHints.pdf

This game was majorly hard. But it had some cool bosses. Was this the game where you had speed control in the flying sections? If so it was majorly frustrating cyling through the speeds .

Ah crap, I misread those scans. Thanks Sean, I will correct.

I enjoyed the difficulty, and still managed to complete the game was disappointed there was no follow up game.