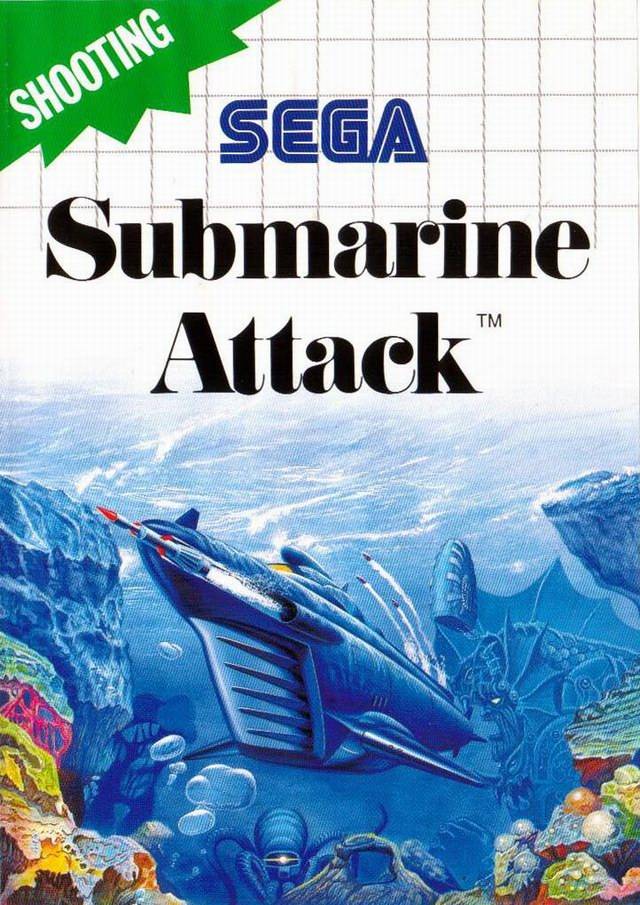 The shoot-em-up genre has such potential. From the hilarious, confounding Parodius series to the intense bullet-hell sub-genre, to singular stand-out works like Thunder Force III and Ikaruga, shoot-em-ups can be visual, aural, and technical masterpieces. Just as often, however, developers push out half-baked efforts that make you question the genre’s worth. 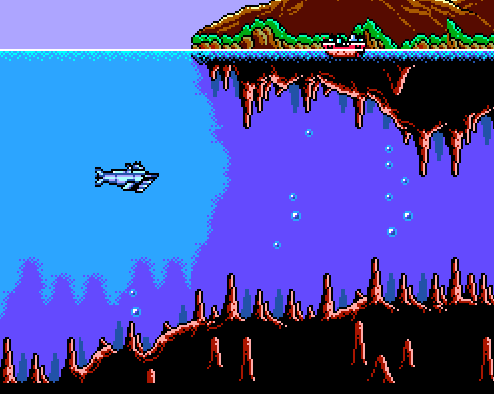 On a sub ride to nowhere.

Like Double Hawk, Submarine Attack is one of many Europe-only Master System games lost to time and general disinterest. Consider this blurb about it on SegaRetro: “The game is set underwater, where the player captains a submarine through six levels destroying enemies.” Not a lot of depth or richness there, but the description says it all. 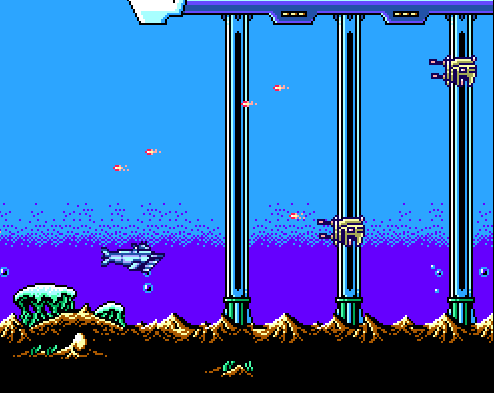 The submarine is a fairly realistic specimen, as far as shmup protagonists go. He’s a slow, bulky bastard who fires missiles both from his front to counter underwater terrors, and from his top to take out overhead threats like helicopters and ships. Speed upgrades help push your considerable girth along, ammo upgrades let you fire more missiles per button press, and health upgrades keep you alive long enough to tell your grandkids about your underwater exploits. 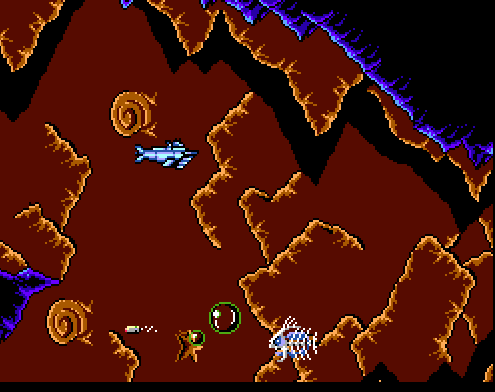 Undead piranhas are just one of the ocean’s many wonders.

Once you get a couple ammo upgrades, you can sleep-shoot through the game. Just fire away by holding down Buttons 1 and 2, and steer the sub around whatever enemies come your way. As you rest, you can take in the level design and music. Caverns, an ancient city, underwater base, etc. are not poorly rendered, but they’re expected and boring. The music, surprisingly, is spunky, full of life, and far better than the game deserves.

Finally, Egypt gets a break from the sun.

If you’re a fan of the genre, you won’t be upset that you spent fifteen minutes with Submarine Attack. It’s mediocre as sin, but it is very playable. That said, the game is tremendous step backwards for the system that gave us R-Type and Power Strike. If anything, the game looks and plays like an NES budget title, which is not what you’d expect or want from a Master System game released in 1990. If you’re looking for a game set underwater where you captain a submarine through six levels destroying enemies, Submarine Attack will provide that. If you want absolutely anything else, look elsewhere.

AND NOW, A THEORY

To understand why many Master System games released in 1989 and ’90 (like Submarine Attack) are so horrendously bland, we must consider that the console was in a time of transition away from Japan and the United States. Japan received its final Master System game in February 1989. America stuck with the console a bit longer, but with the Genesis on the rise, the Master System started shuffling into obsolescence by 1990. In Europe, however, we see the opposite. The Master System actually picks up steam in 1991 and continues to do so through 1993. In fact, more games were released for the Master System in 1993 than nearly any other year in the console’s history.

Even though Europe support for the Master System remained solid in ’89 and ’90, I believe there was conflict at Sega as to whether they should continue to support the system. With the company’s attention firmly on the Genesis and the Game Gear, European Master System gamers started receiving some dregs (like Submarine Attack), until the company realized they could release Game Gear games onto Master System and vice versa because of the two systems’ similar architecture. This meant nothing for American Master System owners, but it was a boon for European fans, who received a lot of solid ports of mostly strong Game Gear titles. Thus, the surprisingly long game release lists for the system from 1991 to 1993, and, I would argue, an increase in the quality of Master System games during this time.

That is a good theory and not much is there to dispute that. Nintendo didn’t publish may big games for the NES in the U.S. following Super Mario Bros 3 but they had all the third party companies doing most of the work for them, so they could afford to concentrate on the Game Boy and the upcoming Super NES. Sega apparently didn’t have that luxury, at least until 1992 when the big third-party companies were finally paying attention to their consoles.

Expanding on your SMS theory:

The Genesis was make-or-break for Sega to remain in the console business, and they were focused on putting everything they could into its success. Once they were comfortable that it was a hit, they were content to invest some resources into the downmarket segment that was still buying SMS games.

Sega was probably thinking about things in similar terms until the sales figures proved them wrong.

I’m going to have to track this one down, as a shmup enthusiast!

I like this game if only to play a shmup set somewhere other than in space.