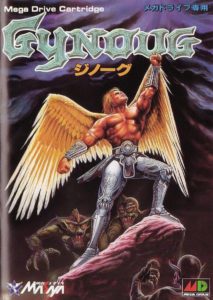 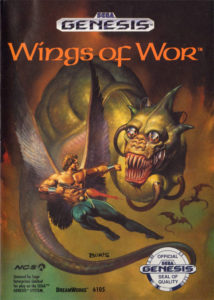 The Dawning of the Age of Aquarius looks a bit different than I remember.

As a renegade twentysomething, I loved almost every shoot-em-up I played. Didn’t matter whether the graphics were terrible or the production values were lousy. If the game could create a propulsive rush that simulates what it might be like to fly through space and shoot armies of creatures, I enjoyed it. But after playing through a king’s ransom of the genre for both Questicle and Sega Does, I now only want to experience the fantastic shoot-em-ups. The Thunder Force III‘s, the M.U.S.H.A.‘s, the Hellfire‘s etc. I understand these games are the pinnacle of the genre, and as such, are less common. As unfair as it may sound, anything of lesser quality just doesn’t appeal to me anymore.

Should… should I be offended?

And with that, we come to Wings of Wor, the first Genesis shoot-em-up released in 1991. The main character Wor controls like a dream, and the relentless action is in keeping with higher-grade titles. But so help my critical eye, I couldn’t ignore the murky visuals, the empty backgrounds, or the limp soundtrack, all of which weaken what could have been a top-tier shoot-em-up.

“The Oceanic Way of Life is a menace. To arms!”

You control Wor, a “winged battle warrior” as described by the manual. Most shoot-em-ups that force you to control a person and not a ship often have clunky controls that result in slower action; the person sprite is also way bigger than a standard ship sprite would be (see: Phelios, Forgotten Worlds). Not so with Wings of Wor. Wor’s small stature and quick, precise movements (even without speed upgrades) feel great and draw you into the game’s action immediately.

Fireballs on the face would be quite painful.

Wor’s beef is with the planet of Iccus and its freaky, aggressive denizens. The enemy design ranges from boring (“oh look a spider”) to perplexing (“is… is that cloud vomiting”) to what-am-I-even-looking-at (“that train has a face on it”).

Thankfully, all of these abominations can be taken down with Wor’s orb attack and/or magic. The orb attack is standard shoot-em-up weaponry, but the strength and width of your attack can be expanded by collecting blue and red orbs. If you upgrade your orb attack all the way, you can cover the screen and reign brilliant death upon Iccus (also, just hold ‘B’ to auto-fire and save your aging fingers some grief). The magic attacks range from lightning bolts that cover the middle of the screen, to energy shields that both destroy and defend, to magic homing arrows that seek out the strongest on-screen enemies, among others. These attacks can be useful, particularly in boss battles, but more often than not, I forgot they were there.

Eye vomit, in all its glory.

Wings of Wor has five stages (six including the final boss rush). Aside from the last stage which takes place in a stomach, none of them are memorable. The visuals are dark, drab, and muted, even when you’re not immersed in stage 1’s bleak caverns or stage 2’s eerie bottom of the ocean. This lack of color and style doesn’t distract from the action, but it does make me wonder why developers NCS didn’t put some additional polish into the visuals. The backgrounds in particular are void of life. Look at the above screenshot. What if clouds flashed with lightning every few seconds to signify the oncoming storm? Perhaps NCS didn’t want to distract players with background flash, but a little extra care for the visual trappings would have drawn me deeper into the game’s world.

Murk and decay swallow me whole…

The soundtrack has few hooks, and far more medieval flutes than I care for in a shoot-em-up. Occasionally, I hear a grimy synth in one of the tracks and I remember what intense Genesis music can be. Mostly, the music fails to get me pumped, which might be the one and only cardinal sin of a shoot-em-up soundtrack. I’ll embed the soundtrack here. Let me know what you think in the comments below.

A good shoot-em-up keeps the action flowing from beginning to end. A great shoot-em-up is an immersive experience that sets your senses on fire. With the former, you can enjoy yourself, but with the latter, you walk away a changed person. Wings of Wor commits heavily to the action at the expense of the experience. The game settles for less, and that’s sad. What could have been a deeper revelation is just another solid shoot-em-up on a system that, frankly, already has enough.

HOW I PLAYED: Normal difficulty (as opposed to Easy, Hard, or Hyper), 5 lives (up from the normal 3)

Why, oh why does it look like the titular wings of wor are coming out of that sprite’s head?