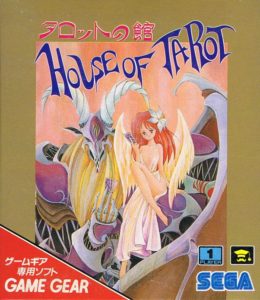 Just a half-naked chick hanging out with Baphomet, no big.

If horror movies have taught us anything, it’s that dabbling in the occult is a terrible idea. Playing with ouija boards can result in spiritual and physical oppression. Uttering spells and chants into mirrors or around pentagrams will yield demonic results. Seeking your fortune from tarot cards on a Game Gear game? I’ve never seen a movie where the main character busted out House of Tarot in a dark room only to have their lives come to a horrible end. That said, no good (or fun) can come from engaging with this one-dimensional tarot sim.

Yes, House of Tarot is a tarot sim, the first and only one of its kind on Sega’s portable handheld, and perhaps any other Sega console. Tarot sims are rare on any system, and if I had to wager why, it’s probably because they don’t sell. If you want to have your fortune read, you go to a fortune teller, not your game console. And while I’m sure there is some overlap between video game players and tarot card users, I imagine one would rather spend their hard earned money on an actual deck of cards as opposed to a tarot simulation.

You could be playing Sonic: Triple Trouble instead.

Perhaps this goes without saying, but there’s no gameplay in House of Tarot. Your character enters a spooky house, you choose from one of three fortune tellers, pick your zodiac sign (I think), then the reading begins around a giant hexagram (the latter is not the most calming of images, by the way). From there, you turn over various tarot cards and read your fortune in hiragana and katakana. Once you’ve gone through all the cards, the game resets and… time for Round 2? To get a different fortune? Sure, why not.

Alright old man, let’s have it.

This was as far as I got. I’m no fan of the occult, and I had no desire to have my fortune read to me by decades-old programming. Even if I enjoyed this sort of thing, I fail to see House of Tarot‘s appeal. Like a game show video game where the prizes aren’t real so who cares if you win, House of Tarot‘s card readings mean absolutely nothing. Did sheer morbid curiosity manifest whatever sales this game received? Did the Japanese folks who bought this game in 1991 believe what the game was telling them, even though they could get a different outcome with another fortune teller? The mind boggles.

The Queen is Dead, I suppose.

I suppose a virtual tarot sim appeals to somebody out there, but I’m not sure who. There’s literally nothing else to do in the “game” but get your fortune read over and over. One fortune takes between 5-10 minutes, and after that, you choose another fortune teller or take the game back to the store/drop kick it into the ocean; 3500 yen for a 5-10 minute “experience” is an enormous ripoff. Nothing scary or life-threatening will necessarily happen when you pick up House of Tarot, but given all the other better games out there, you won’t be happy with your decision either.